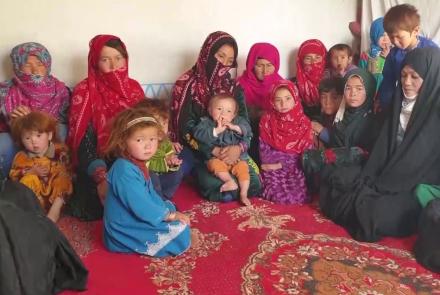 This family says that they spend hot days and cold nights without shelter, and they also face a lack of food.

Following the unrest in Balkhab district of Sar-e-Pul province, scores of Balkhabi households have been displaced to some areas in the Yakawlang district of Bamiyan province.

These family say that they spend hot days and cold nights without shelter, and they also face a lack of food. They asked the officials of humanitarian agencies to provide them assistance.

“All of our belongings are in the desert; we arrived here barefoot; they are all being wasted,” said Salima, a member of a displaced family.

“We spent three to four nights in the mountains on top of rocks and sand, we found neither water nor bread,” said a resident of Balkhab.

These people stated that more than a week has passed since the incident, but they still do not have access to food, shelter, and clean water, and they need assistance.

“In every valley I saw more than a thousand families which did not have bread or blankets. The government must help them, if it does not help, they will all be died,” said Ahmad Hossein, displaced.

It is said that 4 children in one of these areas, where over 30 families have been displaced, died from extreme cold and hunger, and a number of others are at risk for serious injuries as a result of the heat during the day and the cold temperatures during the night.

“My children died from lack of water, we remained thirsty and hungry, we did not find water,” said Gulbadan, a displaced person.

Several days have passed since the displacement of the families, but due to the mountainous location the exact number of the displaced families is not available.