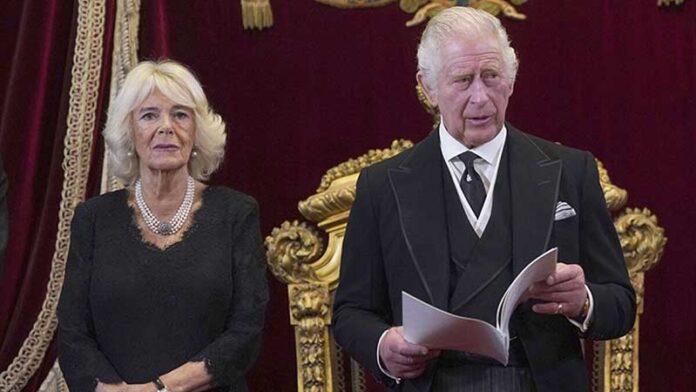 Charles Philip Arthur George, 2 days after the death of his mother, Queen Elizabeth II, was officially announced as the King of Great Britain.
In a ceremony managed by the Transitional Council of the British Monarchy, Charles III, the eldest son of Queen Charles III, was proclaimed and sworn in as King of the United Kingdom at the age of 73.

This ceremony was held on Saturday, September 10, 2022, in the presence of a group of British officials and the Council of Ministers, including former politicians of this country, members of the British Parliament, members of the current government, the House of Commons and nobles at St. James’s Palace in London.

In his pre-recorded first speech released on Friday, September 9, King Charles III thanked his mother Queen Elizabeth II and promised to serve Britain for the rest of his life.
After this speech, he signed the affidavit and then the witnesses signed it.
William, the eldest son of King Charles III and the Queen Consort, were among those who signed the affidavit as witnesses.

Queen Elizabeth II died on Thursday at the age of 96 after a 70-year reign at Balmoral Palace in Scotland. He had the longest reign in British history.